A lot of work went into optimizing this Catznip release: neither Coffea or I have recent hardware which makes it important that additions don’t negatively impact our own overall experience (FPS, etc). The same is true for features added by Linden Lab. Animesh in particular had a very negative impact on performance which we have largely negated with some extra work (including a fix from Beq for rendering rigged attachments with shadows enabled).

Actual performance improvements often depend on your specific computer: all being well, performance should be at least that of R12. If your computer is CPU bound and has GPU to spare then you should see an improvement. If you don’t currently have shadows enabled because it was a little too slow to have enabled all the time, try enabling them with the new release, for some the change is enough to allow “shadows by default”.

Given the wide variety of hardware and settings out there, we would really appreciate to hear your feedback. Especially if it’s worse; or worse under specific circumstances; and of course if you noticed an improvement we’d love to hear from you as well.

One popular suggestion was to add an option to only render friends in order to improve frame rate for busy (shopping/music) events.

In Catznip tradition I ran with the suggestion and gave it a Catznip twist so now we have an extra “Render” option on the quick preferences panel. 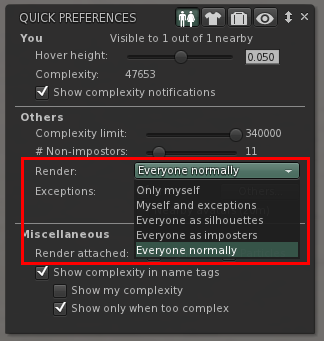 Before explaining the new options in-depth I’d like to make sure everyone is on the same page with how the complexity settings works so let’s start with a quick recap:

The complexity slider determines the maximum complexity that avatars around you can have: if their avatar cost is higher they’ll be rendered as a jelly doll (coloured imposter).

The # Non-impostors slider determines how many nearby people that are under your complexity limit will be rendered in full, while everyone else will be shown as an imposter (a jelly doll that isn’t a uniform colour but rather still has all the textures of the actual avatar).

Catznip then added an easy way for you to select that friends should always be rendered in full, regardless of your other settings, and additionally everyone standing near you (within chat range) as well as individual exceptions.

The new options are (from bottom to top):

If none of the above made much sense then don’t worry; it’s really easy so just play with the option and give it a try and you’ll find what works best for you easily.

As a last note: during testing we found that we would often forget that we turned off the rest of the world so as long as a non-default setting is active the following appears on the bottom of your screen as a reminder you that you’re potentially hiding people around you (it won’t show up in snapshots, don’t worry 😊). 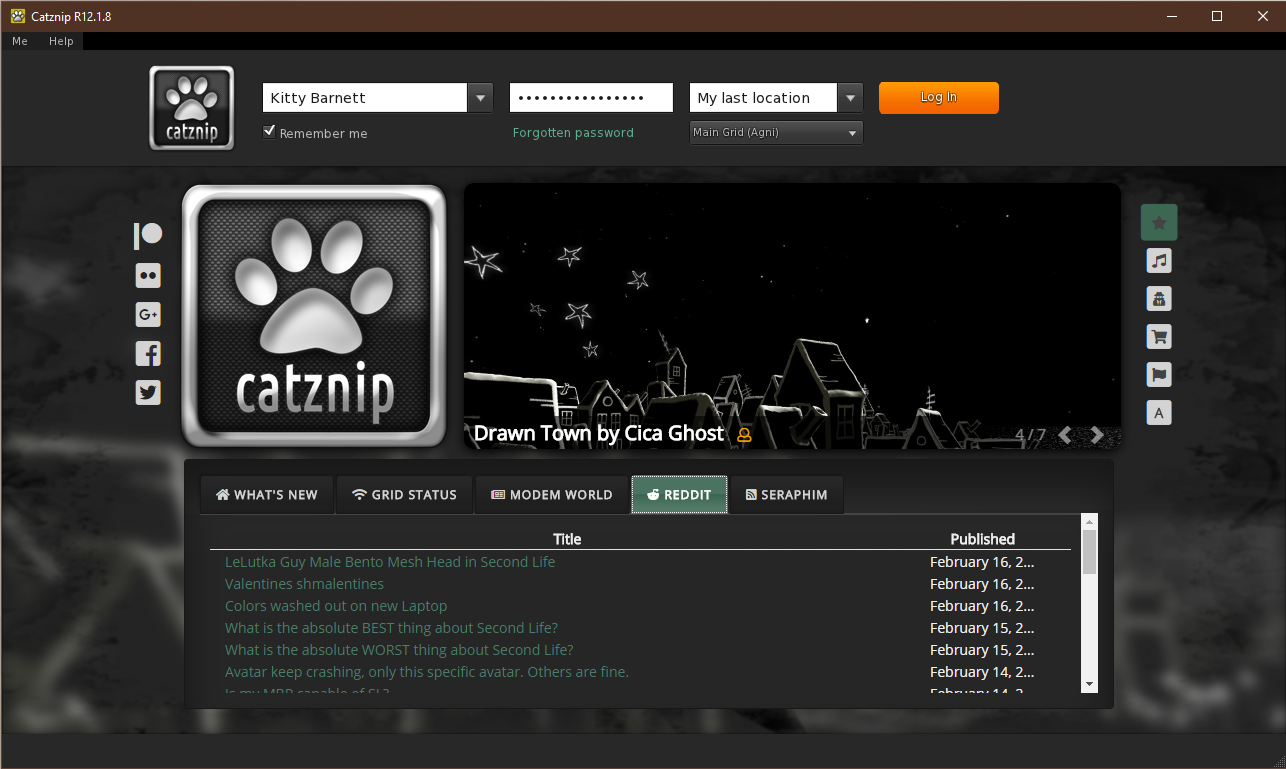 Most likely the very first thing you’ll notice about R12.1 is that the login screen has gotten an overhaul.

To the right side of the Catznip logo you’ll see the parcel highlight slightly improved from previous; it cycles through all of that categories highlights every few seconds. It now has an the indicator providing a rough indication of how populated a location currently is (3 green people being the busiest down to 1 green person for >1 and a hollow orange for deserted). For instance:

Also new is the category selector on the right:

You can hover your mouse over the categories to see what they are and clicking them will switch the carousel over to that specific category.

Down at the bottom we have:

We’d really love your opinion on the new login screen as well: the good >and< the bad! We’ve tried to make it be an actual part of your SL experience and present a lot of the most useful information to you as well as be an aid with the eternal question of “what to do in Second Life”.

If you’ve used Catznip for a while, you’ll most likely have noticed that when you hover over a texture in your inventory that you’ll get a thumbnail preview of that texture.

Similarly to opening a texture preview they could sometimes take a while to open if they weren’t already in your texture cache. While not quite instant, the loading time of texture previews (whether as a tooltip or opening the full preview floater) should be noticeably faster in R12.1. 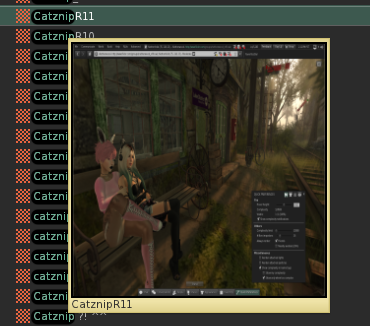 Additionally, when hovering over a folder that contains a single texture you’ll see a texture tooltip for that folder. For vendors that include the product picture with your purchase; or for those who meticulously take pictures of clothing items and/or outfits this gives a very quick and visual way to go through folders, without having to open and examine each. 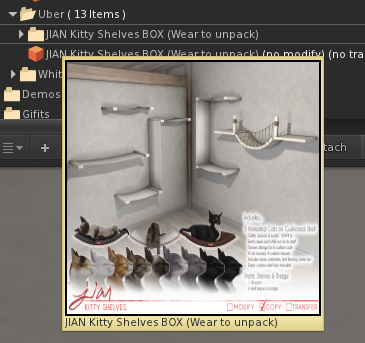 Under the main Me menu / Preferences and then the Chat tab you’ll now find more options to control how much vertical screen space can be occupied by nearby chat toasts and how long they linger on the screen before starting to fade.

(There’s a debug setting to set them to a fixed width but I wouldn’t actually recommend doing that).

Catznip added the “Show in inventory” options to inventory offers and purchase floaters a while back, but it still never felt like it was doing quite what what expected; mostly due to 3 debug settings of which 2 directly conflicted. That’s been cleaned up and (hopefully) simplified.

Inventory offers for an item that can be previewed (notecards/landmarks/textures) now offer to show the object rather than its location in inventory.

When ‘Edit Linked’ is checked, you can use the next and previous buttons to cycle through the individual links of a link set. 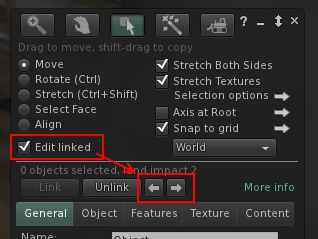 All context menu options that you might (frequently) use to resolve a problem with an avatar in some way are now bundled under a ‘Fix Avatar’ submenu.

Synchronizing animations was a long time request so I’m happy to finally add it, however it might work a bit different to what you’re used to on Firestorm. For instance: if you pick the option for an avatar then the animations that avatar is currently playing, along with animations of everyone sitting on the same object, will all be restarted. This should give a smoother fix of just the people you want rather than reset everyone around you.

A global “Sync Animations” option has been added under the Advanced menu, this restarts all active animations.

Dragging a slider back to its previous value will switch it back to an unchanged state so you can always tell, at a glance, what exactly you’ve changed and what will happen when you press the ‘Save’ button. 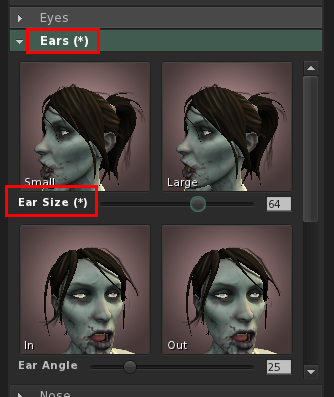 The Windlight quick preferences panel got a few minor changes: 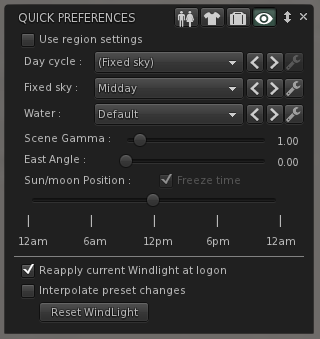 The appearance wearing panel had a number of small bug fixes (see above) as well as the number of worn (and total available) attachments and quick count of temporary/experience attachments.

Drag & drop uploading from Explorer has been in Catznip for a while and now supports all file types that can be uploaded in the viewer. Additionally, when dropping a single file the upload floater will appear so you adjust settings (or preview).

This is a list of all the other bugfixes included in this release :